“I respect animals and appreciate their beauty” 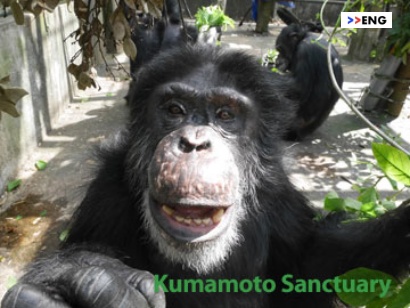 After United States, Japan has the largest number of captive chimpanzees in the world. According to GAIN (Great Ape Information Network), 316 chimpanzees currently live in 49 institutes (zoos, research centers and a sanctuary) – along with 6 bonobos, 21 gorillas and 45 orangutans.

This number is a inheritance of the dark times when chimpanzees were used in biomedical invasive experiments in the country. Studies show that, in the 1970’s, for instance, 150 chimpanzees were taken from the wild directly to Japanese laboratories for medical studies of Hepatitis B and C. In 1997, the country reached a peak of 393 chimpanzees in captivity. By that time, researchers and primates keepers joined in a strong effort to revert the situation, retire the chimps and provide them with humane treatment, socialization and environmental enrichment and life-long care.

Fortunately the result of so much work came in 2006, when the use of chimpanzees in labs definitely comes to an end in Japan. Six years later, the last three former exploited individuals were transferred to Kumamoto Sanctuary (KS), a facility run by University of Kyoto where the apes live their retirement.

KS is also a facility where behavioral specialists take their researches, as it is the case of Dr. Fumihiro Kano, psychologist and PhD in Biological Science, with concentration in Primatology and Comparative Psychology. He works with chimpanzees and other great apes – including humans! – and in this interview he talks a little bit about his main impressions on behavioral researches.

What are the main conclusions of your comparative psychology work with human and non-human apes? Is it possible to compare, generally speaking, chimpanzees to human infants and bonobos, orangutans and gorillas to human adults in terms of cognition and intelligence?
I mainly studied gaze pattern of great apes. Overall, great apes are similar to humans. For instance, they focus on others’ faces and actions intensely when viewing others’ images. They even anticipate others’ actions based on others’ goals and intentions. Also there are some differences between great apes and humans, and also among great ape species. For instance, bonobos view others’ eyes while chimps view others’ mouth when viewing others’ faces. Such difference may be related to each species’ unique temperament (e.g. bonobos may experience less pressure when facing others and therefore may produce more prolonged eye contact).
Generally speaking, it is sometimes useful to compare between great apes and human adults. However, a big difference between human adults and apes/human infants is that human adults are extremely cultural. This includes the way of looking at movies. We consciously or unconsciously know how to view movies based on certain cinematographic rules. Apes and infants may not so much compared to us.

You also have field experience in behavioral observation of wild chimpanzees and bonobos in Africa. Can you point any relevant difference in the behavior and general skills of the individuals in the wild and the ones in captivity (especially the ones retired from lab research)?
In the filed, compared to the captivity, I more easily see that many of chimps’ or bonobos’ behaviors are adapted to the forest lives. For instance, a chimp can climb the tree trunk very fast like running vertically on the tree, with their long arms and short legs. In the captivity, compared to the field, I more easily see their intelligence because I can more closely look at their behavior in controlled conditions, including cognitive tests.
I think that the environment that they grew up either in forest or in captivity surely makes them different. But in terms of fundamental physical and cognitive capabilities, they are more or less similar in my feelings. Anyway, we cannot know such answers completely.
The ones retired from lab research can be different from others for the same reasons, e.g. the ones socially isolated when youth can be socially less motivated even now, but they are not terribly different from others because, currently, and already for many years, they all live in the same enriched environment.

Does your work support animal welfare or environmental enrichment programs for the apes who live at KS?
For me, more or less indirectly. But directly, doing good behavioral researches help to get good funds and also help developing their enrichment programs.