What Steven Wise’s talk tells on the rights of chimpanzees 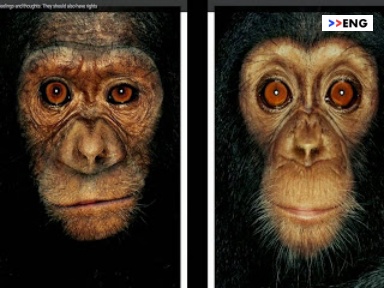 US lawyer Steven Wise, president of the NGO Nonhuman Rights Project (NHRP), summed up in just less than 15 minutes the meaning behind the idea that chimpanzees are rather subjects of law and shall be regarded by the courts as people, not as objects.

In a talk at TED event held in March this year in the city of Vancouver, Wise begins questioning that today an object like a pencil, for example, is legally viewed the same way as a chimpanzee or any other animal. The status of “personhood,” which gives an uncountable number of rights, is a privilege of human beings – and in the United States also of corporations and religious organizations.

But why chimpanzees, animals with proven advanced cognitive capabilities, feelings, culture and memories holders and highly social beings continue to be viewed as objects, legally speaking? This concern, according to Wise, took his attention 30 years ago and he was determined to study the way to bring down the “injustice” of that barrier that separates animals and men. Rethink the way chimpanzees and other animals are treated legally is, above all, a moral duty.

But like any other moral change in human history, it is no easy task – and fast – to win. Wise always knew that and was sure it would take too much time studying before presenting his arguments, representing the great apes, in front of a judge.

To plan the cases on behalf of chimpanzees living imprisoned (mostly caged in medical research laboratories), the lawyer sought precedents in history and quotes the case of the slave James Somerset in England in the eighteenth century, who had his right to Habeas Corpus pioneering granted and opened many doors for the abolition of slavery in the world.
After 28 years of hard study, Wise and the NHRP team filed the first lawsuits on behalf of chimpanzees using the same legal recourse of Habeas Corpus, which is now exclusive to human beings. They are being presented in the state of New York and advances are happening. It is not with the granting of the right to freedom yet, but a more discerning and careful assessment of the cases presented is being achieved.

What previously was denied on the grounds of being “persons right only”, now begins, slowly, to be seen in a new light by the legal system. As Wise at the end of his speech, quoting Winston Churchill, says: “This is not the end. This is not even the beginning of the end. But perhaps this is the end of the beginning …”.

Watch Steven Wise’s talk in TED Vancouver:http://www.ted.com/talks/steven_wise_chimps_have_feelings_and_thoughts_they_should_also_have_rights?utm_source=newsletter_daily&utm_campaign=daily&utm_medium=email&utm_content=button__2015-05-20
Related article: Why we must give the great apes the right of bodily libertyhttp://www.wired.com/2015/05/case-giving-apes-right-bodily-freedom/