The Chimpanzee & Me, by Ben Garrod: realistic and hopeful 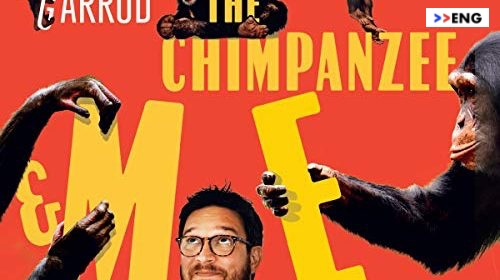 In The chimpanzee & me, academic primatologist and broadcaster Ben Garrod relates his experiences with chimpanzees.  The stories are bracketed by tales of the first chimp he fell in love with – Pasa from the Ngamba Island Chimpanzee Sanctuary in Uganda – and cover the biology and plight of chimpanzees, mainly focussing on those from Liberia Chimpanzee Rescue and Protection (LCRP), a sanctuary established by Jenny and Jimmy Desmond.

“I saw something so profound in those eyes” – a typical response from those whose first encounters with chimps commit them to working for their survival.  What is so wonderful about The chimpanzee & me is the respectful way Garrod talks about the chimps – they are all individuals with their own identities, personalities, temperaments and demeanours.  He doesn’t downplay their power as wild animals – even describing and instance where he was potential chimp prey in a Ugandan forest.  And he pulls no punches when talking about the problems facing the chimps as a species, all created by us: “a funny and sometimes selfish species” – chimps are being “extirpated, not lost.  They’re being systematically killed for a whole host of reasons.”

Garrod describes the genetic and evolutionary closeness of humans and chimps, playfully suggesting we should be Pan sapiens or Pan troglodytes sapiens, or they should be Homo troglodytes.  He addresses the arguments against such familial closeness and advises: “you may not be a monkey’s uncle (or aunt), you are a chimpanzee’s cousin.”  He then turns to the threats to chimps, first covering habitat destruction. Merely a century ago their forests were abundant, but these places “that should have been safe” are dwindling and under constant threat.

Even if the destruction halts, there are challenges facing sanctuaries who aspire to one day return their charges to the wild.  For many forest skills we might think are innate, are in fact learnt as part of a wild chimp community, where baby and juvenile chimps learn through experience, participation, imitation, communication and innovation.  Enter ‘Chimp School’.  Garrod advises the maximum class size six at a stretch – “Any more than that and you’re running around after the ones who would rather go and catch a butterfly, or who really need to climb a tree right now.”

Apart from habitat destruction, chimps are taken for the pet trade and bushmeat.  Garrod is careful to explain the complexities of these horrendous practices – with the local perpetrators often just the lowest rung in large-scale international businesses – from local hunters to domestic consumers. And the statistics he recites for both the international trade in wild animals, and in their meat are horrific, as is the potential in such commerce for allowing the emergence of new zoonotic diseases.  He talks of being part of a confiscation raid in Liberia, and his finding a chimp that had been chained to a tree for thirteen years – the length of time he had been working with chimps.

The results of both the decimation of populations, and the increasing isolation of remaining populations due to habitat destruction, is leading to problems of genetic diversity.  He talks of a long history of abuse in Africa, where we destroyed communities and ways of life we never knew existed – he was talking about human communities, but this is also applicable to chimps. Perhaps the most difficult chapter to read is that about the use of chimps in medical research, he talks of the “out of sight, out mind” strategy of the West – locating its laboratories in countries where regulations aren’t as stringent, and the awful results.  He chillingly describes going into a research facility in the Caribbean.  And he sadly tells the story of Samantha in Liberia – and I dare you not to cry as you read.  Garrod once again however points out the complexity – he is against animal testing but wouldn’t refuse using the resulting medical interventions when a loved one is concerned.

The chimpanzee & me includes an interview with Jane Goodall, and includes a great section on conservation strategies, and how these have changed over the years.  He talks of ‘flagship’ and ‘umbrella’ species and posits that the chimpanzee is the benchmark of what humans are willing to save.  He talks of how each conservation project must be locally focussed and how that makes each different – even two chimp conservation projects will differ according to the local situations.  Not only must projects include local human communities, they must also be mindful of the needs and wants of the chimps: “… we should never look at something like intelligence from our perspective alone.”

The chimpanzee & me is a thorough overview of chimps, their uniqueness, their threats, and those working to save them.  It is beautifully illustrated, mainly with colour photographs of the babies at LCRP.  It is brutally honest about the dire situation that chimps are in, but also includes hopeful stories, such as the young climate activists winning their bid to reforest a sacred hill in the Democratic Republic of Congo, and the “AK-47-wielding soldiers” who ended up helping them.  A wonderful contribution to popular chimp literature.

*Alyson Baker is a Librarian from Nelson, New Zealand.  She has always been interested in wildlife and is appalled not only by the predicted rapid path to extinction of so many animals, but also by the way many of them are treated, especially chimpanzees, our closest relatives.  Alyson volunteered at the Ngamba Island Chimpanzee Sanctuary, Uganda in 2017.  She returned to Ngamba in 2018 and also went chimp tracking in Kibale National Park, and is planning to go back to the sanctuary and visit Budongo Forest Reserve next year.