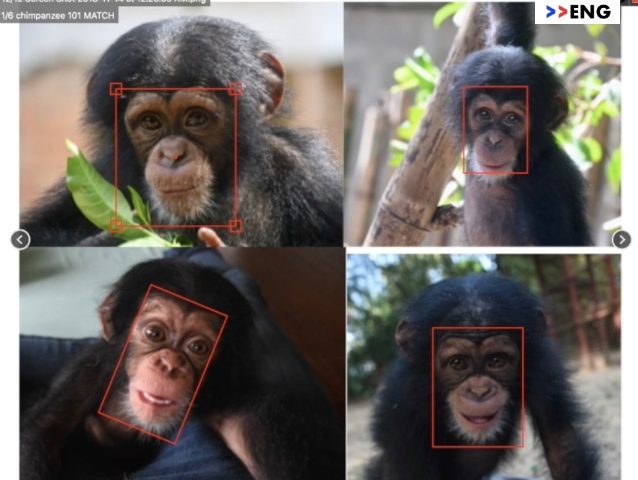 By Jaqueline B. Ramos (article originally published at The Ecologist)

Wildlife trafficking is a multibillion-dollar illegal trade, with buyers and sellers openly using internet social media to do their dirty business.

For two years, a project led by North-American conservationist Alexandra Russo and Dr. Colin McCormick, Senior Technical Advisor at Conservation X Labs, has been developing a facial recognition software. The programme will be able not only to recognize when photos published on the internet contain chimpanzees, but also identify the individual chimpanzee.

The technology – named ChimpFace – will become an essential tracking tool in combatting the illegal trafficking. It was one of the finalists in the Conservation X Labs Con X Tech Prize in November 2018, and its preliminary prototype is being developed.

Russo said: “I thought about this software after I started helping Dr. Dan Stiles in Pegas – Project to end Great Ape Slavery. I very quickly realized that looking for criminals online was actually incredibly tedious – it’s like looking a needle in a haystack, among hundreds and thousands of photos on the internet.

“I started reaching out to computer learning experts asking whether developing an algorithm to recognize great apes in images was within the realms of possibility and luckily they said yes.

In fact, the technology behind ChimpFace is very similar to the one applied in image recognition programs already used by police forces for other types of crimes. For ChimpFace to work, it was necessary to work with photos of known chimpanzees for the development of the algorithm.

Russo said: “The more images we get, the more accurate we can build it up to be. It still needs to be improved a lot, but we have started. And we are really excited!”.

The original idea was that ChimpFace would work as an app, but they decided to start things simply. Russo emplaned: “Microsoft has granted us cloud computation credits, which we will use to deploy the software.

“The first step of the development is the binary classifier, which is training an algorithm to recognize in any public available material either the image is of a chimpanzee or not”. This partial automation of the an otherwise manual search process will save a tremendous amount of time and money.

The second layer of ChimpFace, which requires much more work, is training the algorithm to recognize individual faces, so the movement of an individual can be tracked live online, so that the chimpanzee can be found in facilities in different countries.

This is what the project is currently aiming for, but there are many other useful applications for ChimpFace in the future, like monitoring the trade of live captive chimpanzees and studying wild chimpanzee populations.

Reaching such big goals will require significant funding, time and resources. But the Russo is optimistic: “In a dreamworld, a technology or social media company could incorporate ChimpFace into their systems, as long as they routinely monitor for crimes. Why not just add this to the level of policing already done?

“The timing is fortuitous, as both wildlife trafficking and artificial intelligence (AI) are getting a lot of attention. AI is being advertised a lot, so we’re brining the fight against illegal wildlife poaching to the attention of big companies”.